Valdes, Chucho Y Su Combo – Jazz Nocturno – Vinyl LP
Chucho Valdes Y Su Combo – Jazz Nocturno – Vinyl LP Limited
Jesús “Chucho” Valdés Rodriguez is the son of one of the most important figures in Cuban music, pianist, bandleader, composer and arranger Bebo Valdés.But Chucho did not grow on his father’s shadow and soon developed his own piano style and as early as his early twenties he was already leading his own band.
That was the early 1960s and he soon got his combo into the Areíto Studios of Havana to record the amazing jazz sessions that would be released by the soon to be legendary label EGREM.
The musicians that participated in the sessions would be the base for his future big band Orquesta Cubana de Música Moderna and comprised “Chucho” himself on piano plus Paquito D’Rivera (alto sax and clarinet), Julio A. Vento (flute), Alberto “El Men” Giral (trombone), Carlos Emilio Morales (guitar), Enrique “Kike” Hernández (double bass) and Emilio del Monte (drums).
The sounds featured on “Jazz Nocturno” are pure Cuban coolness, latin jazz rhythms with flute led lounge sounds and piano beaten dancefloor classics.

B1. Átomo
B2. Cha Cha Niña
B3. Bebada
B4. Por La Libre
B5. Mambo Influenciado
B6. Guasabeando Voy
B7. Descarga De Monte Adentro 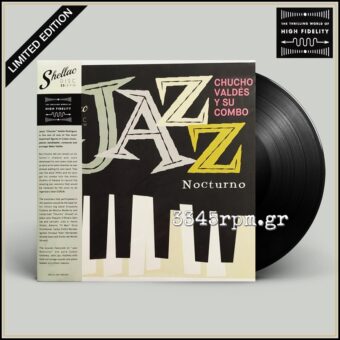