Tindersticks – Simple Pleasure – Vinyl 2LP 180gr
Tindersticks – Simple Pleasure – Vinyl 2LP 180gr – Limited Edition!
2LP 180gram Audiophile vinyl in Gatefold sleeve!
Tindersticks is an English alternative rock band formed in 1991 by Stuart Staples, Dave Boulter, Neil Fraser, Dickon Hinchliffe, Al Macaulay and Mark Colwill.
In 1993 they released their first self-titled album, and the following years recorded several albums, documentaries and film soundtracks.
During the 90s Tindersticks stood apart with their dark, literary lyrics and melancholy orchestrations and were a different breed as both the British indie scene and the Brit-Pop sound dominated the UK charts.
Their fourth album Simple Pleasure steered the group into snappier and lighter songs, however the liner notes proved that the recording process was a painstaking experience. The respectful cover of Odyssey’s “If You’re Looking For A Way Out” is a perfect example of their new influences by soul, gospel and jazz music.
This Music On Vinyl Expanded Edition features the original album (9 songs) and no less than 12 bonus tracks, including “Twisted Wheel” (which is the demo version of “Can We Start Again”) and the Adrian Sherwood remix of “I Know That Loving”.
Expanded Edition contains original album plus 12 bonus tracks, “I Know That Loving (Adrian Sherwood remix)”, “Twisted Wheel” (demo version of “Can We Start Again”), “Puppyfat” and 9 more songs. 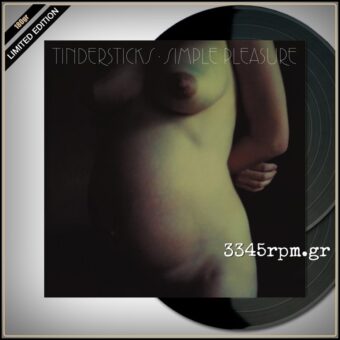