To some movie directors, the music heard in their films seems as (or more) important than the images seen or the dialogue spoken.
Many Quentin Tarantino fans would regard a Reservoir Dogs without “Stuck in the Middle with You” or a Pulp Fiction without “Misirlou” as not Reservoir Dogs or Pulp Fiction at all.
Tarantino describes his perhaps unsurprisingly musically-inspired method of film conception as follows: “One of the things I do when I am starting a movie, when I’m writing a movie or when I have an idea for a film is, I go through my record collection and just start playing songs, trying to find the personality of the movie, find the spirit of the movie.
Then, ‘boom,’ eventually I’ll hit one, two or three songs, or one song in particular, ‘Oh, this will be a great opening credit song.’
The Tarantino Experience pays tribute to one of the greatest filmmakers of the last 50 years and his uncanny talent.
Featuring music from and inspired by his films Pulp Fiction, Kill Bill, Vol. 1, Jackie Brown, Reservoir Dogs, Death Proof and his 2019 picture Once Upon A Time In Hollywood, attempts to help you explore Tarantino’s personal way to approach his projects when it comes to their music.
With fantastic artwork and remastered sound, The Tarantino Experience is an essential additional to your vinyl collection.
And remember, it won’t be available on streaming platforms.

Tracklist:
LP 1
A1. Misirlou – Dick Dale & The Del-Tones
A2. You Never Can Tell – Chuck Berry
A3. Spooky – Dennis Yost & Classic IV
A4. I Put A Spell On You – Screamin’ Jay Hawkins
A5. Mambo Miam Miam – Serge Gainsbourg
A6. Good Thing – Paul Revere & The Raiders 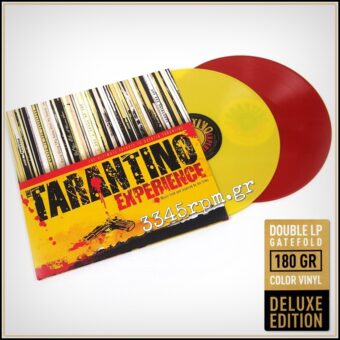