“A tall, imposing figure in front of an orchestra, so tall that he often dispensed with the usual conductor’s podium, Efrem Kurtz had a graceful, baton-less technique that drew a fluid yet well-controlled response from the players and infused a vivid poetry into romantic music in particular. Much sought after in the music of his native Russia, and in the ballet music in which he first made his name conducting Anna Pavlova, Kurtz was a link back to the musical life of pre-revolutionary St Petersburg.”
So wrote most eloquently Noel Goodwin in his 1995 obituary in the Independent of the distinguished Russian conductor, who had studied with Glazunov and Tcherepnin no less, and was a pupil of Arthur Nikisch.

Kurtz was a familiar name with the Philharmonia to the record collector of the 1950s and Yehudi Menuhin was in his prime. Menuhin’s presence on the recording can be explained by a long tradition of celebrated violinists performing the solo violin parts of Swan Lake. 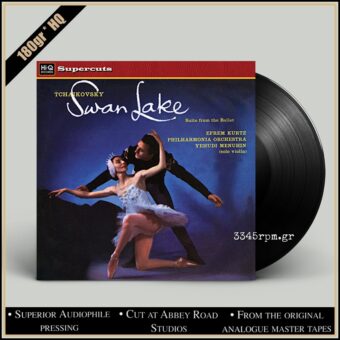