André Cluytens was an interesting figure and appreciation of his artistry was on the ascent when he died prematurely in 1967 at the age of 62. Born in Belgium in 1905 to a musical family, his career spanned the concert hall, opera house and recording studio and he spent many years as chief conductor of opera houses in Belgium, France and Vienna.
He was also was the first Frenchman (he became a citizen in 1940) to conduct Wagner at Bayreuth. In 1949 he succeeded Charles Munch as Chief Conductor of the Paris Conservatoire Orchestra and he toured widely, taking the Vienna Philharmonic Orchestra to the UK, US, and Canada.
He was renowned for his interpretations not only of the French but also German/Austrian repertoire. He made several recordings with the Philharmonia Orchestra in London for EMI in the late ’50s and early ’60s, of which this is a fine example and the original LP is much sought after by collectors.

Tracklist:
Side One:
1. RIMSKY-KORSAKOV: Capriccio Espagnol, Op.34
No.1 – Alborada
No.2 – Variation
No.3 – Alborada
No.4 – Scena E Canto Gitano
No.5 – Fandango Asturiano
2. BORODIN: In The Steppes Of Central Asia

Recorded at the Kingsway Hall, London in November 1958 and produced by the splendidly named Walter Jellinek. The engineer is unknown.

Pressed on 180g vinyl to audiophile standards using the original EMI presses by The Vinyl Factory in Hayes, England. 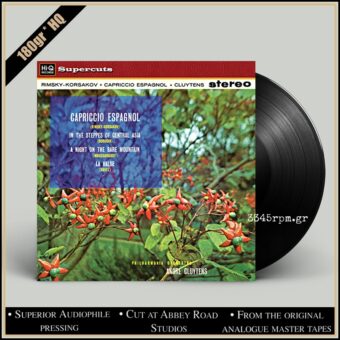