Record Store Days – Μουσικό βιβλίο
Record Store Days – Gary Calamar & Phil Gallo.
Record Store Days: From Vinyl to Digital and Back Again!!!
While records have dominated the home audio electronics business throughout the 20th century, little has been published about record stores themselves.
With few exceptions, most record stores were family operated or were departments in larger stores.
Gary Calamar and Phil Gallo have co-authored what may be the first comprehensive book on the evolution of the record store, Record Store Days: From Vinyl to Digital and Back Again.
Records appeared as discs in 1900 with two major manufacturers, Columbia and Victor.
One format was at 80 RPM while the other was at 76 RPM. It took an entire generation of listeners to standardize the speed to 78 RPM, in 1925.
At that era discs were competing with cylinder recordings made popular by Thomas Edison in 1897.
Vinyl records have undergone turbulent evolution as 78’s were replaced by long playing records and 45-rpm singles.
Could someone in the late 1960’s, the era of the vinyl LP, been nostalgic for 78 vinyls?
The CD emerged in the 1980’s, after 8-tracks and cassettes fizzled.
Since then, a debate continues about the qualities of analog and digital sound.
Now music is wireless, seeming to be downloaded from the air.
The authors of Record Store Days seem to believe that vinyl recordings may soon upset the digital wave. This could be a fun read…. 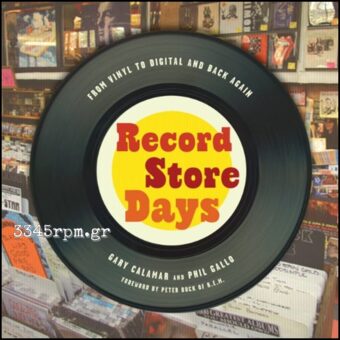