Ram Jam – Ram Jam – Vinyl LP 180gr
Ram Jam was an American rock band formed in New York City in 1977.
The band consisted of Bill Bartlett (guitar), Howie Arthur Blauvelt (bass), Pete Charles (drums), and Myke Scavone (lead vocals).
Their debut album Ram Jam was also released in 1977.
The first track on the album, the single “Black Betty”, is Ram Jam’s best known song.
Despite some controversy due to the lyrics of the song, it went to #7 on the UK singles chart in September 1977 and reached the top 10 in charts around the globe.
Other highlights of the album are “Keep Your Hands on the Wheel”, a stomping, driving-themed rocker in the vein of Bachman-Turner Overdrive, and “Overloaded”, a swinging rocker built on a taut bassline and a catchy, cowbell-driven chorus.
The album also features “Too Bad on Your Birthday,” a mid-tempo rocker with a sing-along chorus that was later revived by Joan Jett.
Featuring the hit single  “Black Betty”. 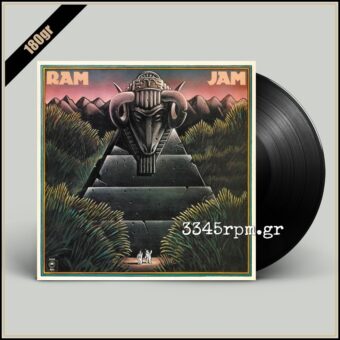