Pink Floyd – A Saucerful Of Secrets – Vinyl LP 180gr
The band’s second album, originally released in 1968, was the first album to feature David Gilmour, who replaced Syd Barrett on guitar and vocals.
It is both the last Pink Floyd album on which Syd Barrett appeared and the only studio album to which all five band members contributed.
This is Pink Floyd in transition from Barrett’s psychedelic whimsy to the style of their epic pieces.
Classic tracks include Jugband Blues and Set The Controls For The Heart Of The Sun.
Remastered from the Original analogue tapes by Bernie Grundman, James Guthrie, Joel Plante.
The Stereo Remastered Album On Heavyweight 180gr Vinyl!

Tracklist:
Side A:
A1. Let There Be More Light
A2. Remember A Day
A3. Set The Controls For The Heart Of The Sun
A4. Corporal Clegg

Side B:
B1. A Saucerful Of Secrets
B2. See-Saw
B3. Jugband Blues 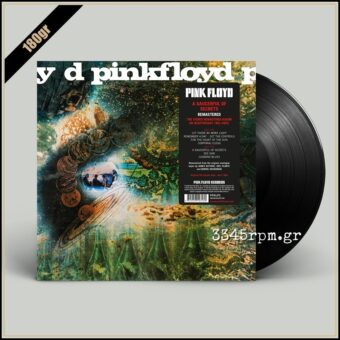