DVD 1: U2 | Phenomenon
Here it is at last, the first fully independent career review of U2 on stage, on record and on film. This is the powerful story of the secrets behind the U2 phenomenon.
Experience the rollercoaster ride to fame which transformed Bono, The Edge, Adam Clayton and Larry Mullin from unknowns to international superstars.
Discover the hidden keys to the music on an amazing journey through the highs and lows of the U2 story including the international hits.
The U2 Phenomenon was made with complete editorial freedom.
This film is not authorized, approved by or associated with U2.
The result is the most hard hitting and frank review of the personalities, work and music ever produced.
Tracklist:
U2 – Stories For Boys
U2 – Out Of Control
U2 – The Electric Co
U2 – Gloria
U2 – Elevation
U2 – New Year’s Day
U2 – Sunday Bloody Sunday
U2 – All I Want Is You
U2 – Where The Streets Have No Name
U2 – Love Town
U2 – I Will Follow
U2 – Discotheque
U2 – Please

DVD 2: Coldplay | Phenomenon
This is the ultimate critical review of Coldplay on record, on stage and on screen.
In the space of just three amazing albums Coldplay have been transformed from unknowns to international superstars.
Drawing on archive film and interviews with the band a team of leading music critics and working musicians reviews and assesses the music of Coldplay to reveal the secrets behind the Coldplay phenomenon.
The Coldplay Phenomenon was made with complete editorial freedom.
This film is not authorized, approved by or associated with Coldplay.
The result is the most hard hitting and frank review of the personalities, work and music of Coldplay ever produced.
Tracklist:
Coldplay – What If?
Coldplay – Speed Of Sound
Coldplay – Politik
Coldplay – The Scientist
Coldplay – Yellow
Coldplay – Everything’s Not Lost
Coldplay – Life Is For Living
Coldplay – Don’t Panic
Coldplay – Clocks
Coldplay – Trouble
Coldplay – Fix You
Coldplay – Low
Coldplay – Square One
Coldplay – In My Place

DVD 3: Green Day | Phenomenon
This is an independent critical review of the music of Green Day, on stage, on film and on record.
The film draws extensively on the legendary live appearance by Green Day at Woodstock 1994 previously unavailable on DVD, and also features rare live footage from film and television archives around the world.
A leading team of music journalists, working musicians and Green Day insiders reviews and re-assesses every album produced by this extraordinary band.
Also featured is an insider’s behind the scenes guide to the making of American Idiot.
This film was made with complete editorial freedom.
It is not approved, endorsed or associated with Green Day or the management of the band. The result is the hardest hitting frank and penetrating review of the music and personalities which shaped the Green Day phenomenon ever produced.
Tracklist:
Green Day – Longview
Green Day – Welcome To Paradise
Green Day – American Idiot
Green Day – Boulevard Of Broken Dreams
Green Day – Maria
Green Day – Basket Case
Green Day – King For A Day
Green Day – Blood
Green Day – Sex & Booze
Green Day – Brain Stew 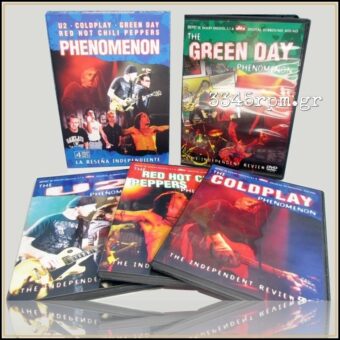