Originally issued as a boxed set of all the late Mozart Symphonies (from No.35 to No.41, complete with rehearsal disc), these recordings are generally considered to be the most successful Karajan made of these works and although it is still very much Mozart in the Grand Manner, the performances manage to combine a richness and beauty of sound with vigorous rhythmic detail, superbly caught by the EMI engineers.
Cut at Abbey Road Studios from the original stereo analogue master tapes with the Neumann VMS82 lathe fed an analogue pre-cut signal from a specially adapted Studer A80 tape deck with additional ‘advance’ playback head, making the cut a totally analogue process. 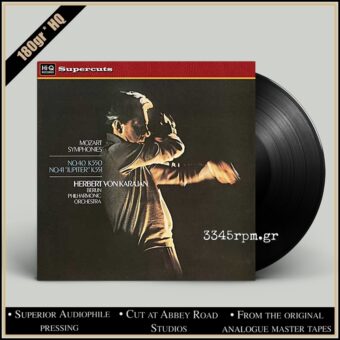