Last Shop Standing – Whatever happened to record shops? Record Store Day Edition – Music Book
Whatever happened to record shops? Not long ago there was one on every high street but over 550 have closed in the last five years.
Now in its 6th reprint, Last Shop Standing lifts the lid on an industry in tatters.
Graham Jones has worked at the heart of the music retail business since the golden era of the 1980s.
He was there during the years of plenty and has witnessed the decline of a business blighted by corruption and greed.
Undertaking a tour of the last remaining independent record shops, he has collected a wealth of entertaining stories that explain why the best are still standing and how the worst of them blew it. In telling the tale, Graham has unearthed some wry anecdotes about dozens of rock stars and music industry figures including The Beatles, Led Zeppelin, Jimi Hendrix, Elvis Costello, David Bowie, The Sex Pistols, Joy Division, Van Morrison and many others.
Last Shop Standing is a hilarious yet harrowing account by a man who has been there and sold that. It is a book that will bring a smile to the face of anyone who has ever bought a CD or attended a concert and still has the T-shirt to prove it. 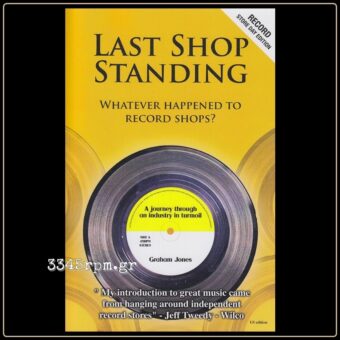