Elvis Presley – The Ed Sullivan Shows – 3DVD
Elvis Presley & Others: The Ed Sullivan Shows – 3DVD Deluxe Set
Share the excitement of Elvis Presley’s earth-shattering introduction to US TV audiences in these three unforgettable episodes from The Ed Sullivan Show, now on DVD for the first time ever, and experience or yourself why Elvis became the legendary King of Rock and Roll!
Appearing on the show for the first time on September 9, 1956 Elvis sent shock waves through the audience with his soulful singing, wild hip gyrations and raw energy attracting an unprecedented TV audience of more than 60 million people.
Elvis returned to the show on October 28, 1956, continuing to provoke ecstatic screams with such hits as ‘Don’t Be Cruel’, ‘Love Me Tender’ and ‘Hound Dog’.
These exhilarating performances were so explosive that during his third and final appearance on the Sullivan show on January 6, 1957 Elvis was only filmed above the waist!
Bonus Material include:
1. A rare home movie capturing a very early Elvis performance shot in August 1955 in Texas
2. Featurette ‘Elvis and Ed Remembered’
3. Elvis Is on His Way! – Ed Sullivan Show Clips
4. Special Elvis Moments
5. Rare home movies of Elvis with Priscilla, Elvis and friends on a film set and some of the first shots of daughter Lisa Marie
6. Caught on Celluloid: The First Moving Pictures of Elvis Presley
7. Documents from the Graceland Archives
8. Documents from the Sullivan Archives 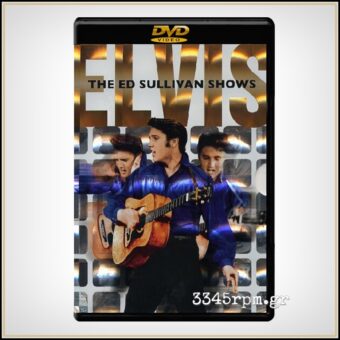