John Coltrane and Kenny Burrell first played together in 1951 as members of the Dizzy Gillespie band.
From 1956 to 1958 they would also participate on four albums together: Paul Chambers’ Whims of Chambers (Blue Note BLP-1534), Interplay for 2 trumpets and 2 tenors (Prestige 7112), Kenny Burrell & John Coltrane (Prestige/New Jazz NJLP- 8276), on which they were co-leaders, and the album presented here, The Cats (New Jazz NJLP- 8217).
Originally issued under Tommy Flanagan’s name, The Cats features an outstanding sextet in long performances that leave room for all of the players to solo without restrictions.

Track A2 is a trio performance by the rhythm section. 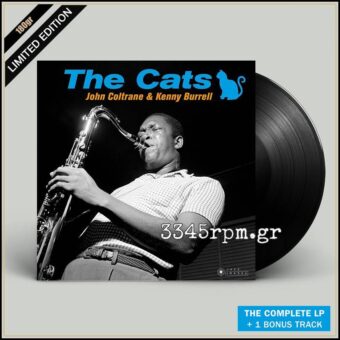