After the Danger Mouse-produced Attack & Release brought a little more attention to the Keys they decided to continue working with producers in the mold of that record.
2009 found the two members, guitarist/vocalist Dan Auerbach and drummer Patrick Carney, experiencing a communication breakdown due to Carney’s relationship with his wife.
Carney eventually divorced from his wife and Carney and Auerbach realized the importance of their band.
The duo reconvened in Alabama to work on Brothers, recording at the Muscle Shoals Odyssey Studio.
The result was their most commercial and critical success to date. You’re probably familiar with their Gary Glitter-aping “Howlin’ For You” and the Danger Mouse-produced “Tighten Up” which went on to win a Grammy for Best Rock Performance by a Duo or Group with Vocals. Along with that they also picked up the Grammy for Best Alternative Music Album.
The record’s packaging serves as an ode to one of their greatest influences, Howlin’ Wolf.
Tracklist:
LP 1
A1. Everlasting Light
A2. Next Girl
A3. Tighten Up
A4. Howlin’ For You
B1. Black Mud
B2. The Only One
B3. Too Afraid To Love You
B4. Ten Cent Pistol
LP 2
C1. Sinister Kid
C2. The Geo Getter
C3. I’m Not The One
C4. Unknown Brother
D1. Never Gonna Give You Up
D2. These Days
D3. Chop And Change
(Previously released on The Twilight Saga: Eclipse – Original Motion Picture Soundtrack)
D4. Keep My Name Outta Your Mouth (Previously unreleased)
D5. Black Mud Part II (Previously unreleased)
* Released: 01.01.2021 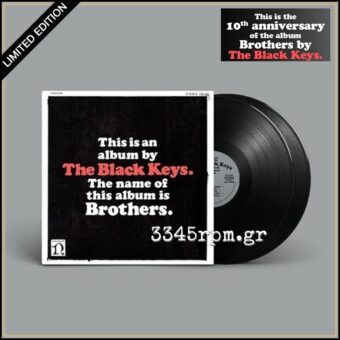