Holiday, Billie – Billie The Original Soundtrack – Vinyl LP
Billie Holiday – Billie: The Original Soundtrack Vinyl LP
The album is the aural companion to the upcoming Billie Holiday documentary directed by James Erskine.
Billie: The Original Soundtrack, available on Vinyl LP, collects some of Holiday’s most popular songs featured throughout the transfixing film including “God Bless The Child,” “I Only Have Eyes For You,” “I Loves You, Porgy” and “Strange Fruit” along with instrumental cues.
Playing out like a film noir, Billie, directed by James Erskine, explores the story of one of the world’s greatest jazz singers, whose life was mired in controversy, through a wealth of never-before-heard taped recorded in the 1970s by the journalist Linda Lipnack Kuehl. Over eight years, Kuehl tracked down and recorded over 200 hours of interviews with extraordinary and brilliant characters that populated the iconic and controversial singer’s short, tumultuous life.
But after Kuehl’s unexpected death, her tapes were never heard. Until now. Using state-of-the-art techniques to bring her performances to life in color for the first time together with home movie footage, specially shot material, archive and still images, Billie plays out as a film noir and captures the complexity of a legend through the eyes of a woman whose obsession would lead to her own mysterious death. Holiday had one of the greatest voices of all time…

Tracklist:
Side A
A1. Now Or Never
A2. God Bless The Child
A3. Hoppin’ Around
A4. Blues Are Brewin
A5. Funeral In New Orleans
A6. Fine And Mellow
A7. Strange Fruit
Side B
B1. Just One More Chance
B2. My Man
B3. I Only Have Eyes For You
B4. I’ll Never Smile Again
B5. Don’t Explain
B6. I Loves You Porgy 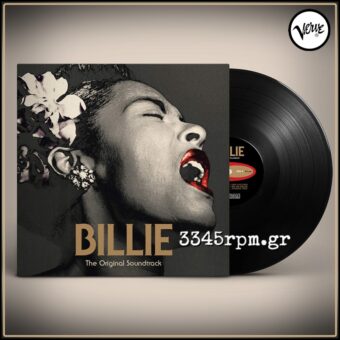