Belafonte, Harry – The Midnight Special – Vinyl LP 180gr HQ
No attempt has ever been made to compare Harry Belafonte with other singers of his own generation or generations following.
Perhaps this is because there simply is no other singer in the American folk scene who possesses anything remotely comparable to his uniquely silky yet dusky voice, or his genial mix of calypso, blues, gospel and traditional songs.
The present album provides a wonderful testimony to the Jamaican singer’s flexibility and multifariousness, which he learned to perfection of New York’s jazz clubs.
It includes songs such as “Midnight Special“, a prisoner’s nocturnal prayer for freedom, and “On Top Of Old Smokey“, which Belafonte instils with intricate rhythm and Caribbean flair.
And the tailor-made arrangements are no less thrilling: whether possessing all the drive of a stomping big band, filled with the intimacy of a smoochy small ensemble (with Bob Dylan on the mouth organ!) or with an earthy, folksy, blue grass sound – there’s all that and plenty more!
To put it in a nutshell: a veritable feast of traditional music which doesn’t sound the least ‘traditional‘.
This Speakers Corner LP was remastered using pure analogue components only, from the master tapes through to the cutting head.
All royalties and mechanical rights have been paid.
Recording: 1962 by Bob Simpson
Production: Hugo Montenegro 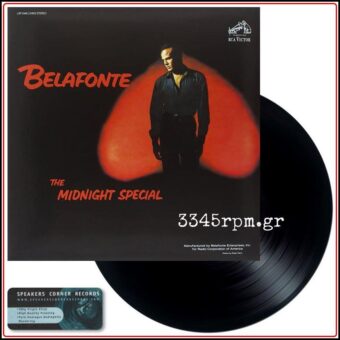