AC/DC – Back In Black – World’s Greatest Albums – DVD
The year was 1980, and AC/DC had just lost legendary frontman Bon Scott.
He had been the epitome of the hard rockin’ sound the band made their own, and this would have been the end of the line for most. However, Brian Johnson was recruited and the band produced their most popular album Back In Black, selling over 40 million copies worldwide.
A dedicated team of professionals, including AC/DC aficionado and author Paul Stenning and journalist and author Carol Clerk, review the key factors in the conception and creation of the album.
One of the most important elements in Back In Black was the production, and experts Tony Platt and Simon Davie insight into what really made this album buzz.
With rare archive performance and interview footage, this film will take you behind the facade of the official release, in an uncompromising and complete review of one of the best Rock ‘n’ Roll albums ever made! 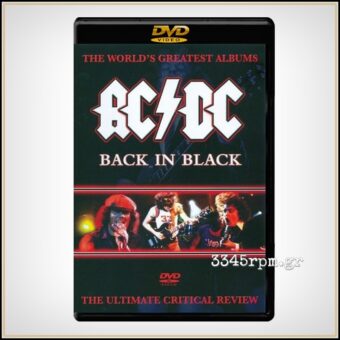